Many scholars have often dismissed the history of East-West relations. In fact, categorical distinctions, binaries and a strong focus on conflict have characterised much of the Western theoretical corpus on cultural history. This particular Eurocentric view, however, both fails to account for the achievements of the East and distorts Western history (Goody 1996).

Opposed to this framework of analysis, I argue that there is a need to reconsider the West along polycivilisational lines (Hobson 2007a, p.150), hence understanding civilisations as constantly constituted and re-shaped through interactions with others (Barkawi and Laffey, 2006). Thus, I advocate for a more dynamic interpretation of the West’s historical trajectory in order to abandon the Eurocentric tenets and constructions and rethink the Eastern and Islamic legacy within the West’s history.

The Western identity is a rather recent product within the course of world history. Between 1700 and 1850, the formation of a Eurocentric discourse became the essential underpin of the incipient European identity in a post-Christendom era. However, as Amin (1989, p.vii) suggests, ‘Eurocentrism is not a banal ethnocentrism’, a simple narcissist discourse of superiority that, I argue, can be found throughout history in every single collective.

Conversely, the Eurocentric discursive complex is one that assumes that civilisation only rooted in the Occident while the Orient becomes either instrumentalised or ostracised within the Western cosmology (Adib-Moghaddam 2011, p.57). The East in general, and Islam in particular, were given a mere functional value in the Eurocentric narrative in defining what Europe was not.

Thus, there are two characteristics of paramount importance in the re-engineering process (Ibid, p.61) of a ‘self-constituting’ Western consciousness: firstly, that the Eastern and Western civilisations were imagined as two opposed camps divided by a ‘civilisational line of apartheid’ (Hobson 2007a, p.151); and secondly, that Islam was artificially ‘othersied’ and transformed into a cultural entity inherently characterised by its non-rationality, backwardness and despotism. 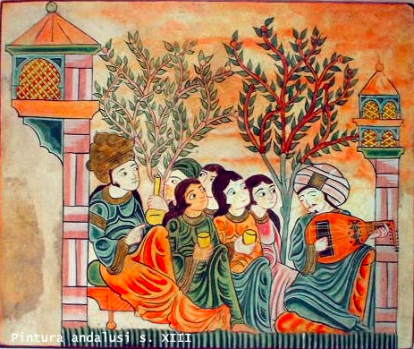 The non-Eurocentric scholarly community has certainly grown in the last decades, but historians seem still far from closing the gap between Western history and that of the ‘peripheries’. Because the conceptual tools at their disposal are still feeble, fierce critiques such as the one written by Hobson (2004), albeit detailed and instructive, fail to overcome the binaries or develop a positive explanation.

Thus, I advocate for a historical-dialogical examination of the Western civilisation. My approach draws upon the notion of dialogism put forward by Bakhtin in his literary theory. As he puts it, ‘The word is born in a dialogue as a living rejoinder within it; the word is shaped in dialogic interaction with an alien word that is already in the object. A word forms a concept of its own object in a dialogic way’ (Bakhtin 1981, p.279). A dialogical approach to history affirms the necessity to acknowledge the plurality of subjectivities within one particular collective, hence pointing at the incapacity for a subject to exist outside the ideas, discourses and history of the others. This approach, thus, aims to mediate between conflicting historical narratives and proposes an interactive deliberation over history in which meanings can only be created dialogically (Kearney 2013).

One of the most problematic tenets of Eurocentrism is its interpretation of rationality and economic progress in a binary way: either you have them or not. What follows is that the Western civilisation seems to have such qualities in an exclusive and endogenous way, whereas the East and the Islamic world are seen as hostile to those ideas. What I propose is to challenge this assumption through an interpretation of the East and Islam as co-constitutive of the West’s historical trajectory, hence pointing at their common legacies and experiences.

As Amin (1989, p.10) argues, up until 1500, Western Europe was part of a plural ‘regional tributary system’ that also included the Arab-Muslim peoples of North Africa and the Levant. This cultural system was characterised by the pre-eminence of the ‘metaphisical aspiration’ (Ibid, p.7) of different religions in claiming an absolute truth. However, and contrary to the Eurocentric proposition, Europe was at the periphery of such system, which had its centre in the eastern end of the Mediterranean.

And there were precisely the Muslims, not long after the Prophet’s death (Hobson 2004, p.177), who put forward the notion of the man as a rational agent. As the Eastern Christians did, they were able to reconcile the Hellenic scholasticism with their new faith (Amin 1989, p. 42), giving birth to a synthesis that would have an enormous impact on European modern thinking. Such intellectual position became the nodal point of thinkers such as al-Razi (865-925), al- Farabi (873-950), Ibn Sina (980-1037) or Ibn- Rushd (1126-1198).

Ibn-Rushd was the most influential thinker during the second period (post-Ghazali) of falsafa. He sought the reconciliation of religion and philosophy by delimiting the roles of both, hence pioneering a quasi-secular, individualist construct that, when entered Europe, shook the tectonic plates of the Church (Walker 2005, p.62-63).

Embraced by many European thinkers, his ideas provided the substratum that nurtured the rebirth of scholasticism in a Europe that seemed incapable of assimilating Eastern Hellenic philosophical ideas until the 11th century. As Hobson (2004, p.178) highlights, the Muslims also began to embrace the idea of scientific experimentation, which later became the underpinning of the scientific revolution that took place in Europe.

Rather interestingly, the absence of a ‘clash mentality’ in the syntaxes of these various Islamic philosophers (Adib-Moghaddam 2011, p.76) suggests that, beyond the tensions that existed between two religions that equally claimed to bear universal truth, the interrelations between both entities were characterised by a common legacy of rational enquiry, philosophy and science. And in fact, the history of al-Andalus – the East within the West, one could argue – reminds us of how the peoples of the Book co-existed and interacted throughout many centuries in a largely peaceful way (Gutiérrez de Terán 2012).

Beyond questioning the Western rational and scientific exclusiveness, many non- Eurocentric scholars have been pointing at the crucial role that the East and the Arab Islamic world have had in the West’s trajectory towards capitalism and economic development. In fact, one of the crucial arguments put forward by Hobson (2004, p.22) is that the Eastern resource portfolios had been essential to every European turning point between 500 and 1492.

Two points are worth noting at this stage: firstly, that the huge flow of ideas and capital which sprout in the East and later incorporated in the West invalidates the Eurocentric conception of the East and its presupposed lack of agency. On the contrary, by looking at the agency of ‘the other’ we can move from the apparently unbreakable ‘clash mentality’ and engage in a more nuanced analysis by stressing trends of civilizational cross-fertilisation. And secondly, that the mercantilist mentality is not intrinsic to the Western civilisation as the paladins of Eurocentrism might argue.

As Goody (1996, p.82) suggests, the development of a rational system of accounting cannot be exclusively attributed to the growth in mercantile activity in medieval and Renaissance Europe, but rather as developments that already took place in similar economic and trade conditions of across the Eastern Mediterranean and South East Asia.

Furthermore, by acknowledging the essential role of the family in running commerce and private activities in different Eurasian societies (Ibid, p. 192), we can challenge the Eurocentric dichotomy of the ‘primitive’ East as anchored in tribal, despotic relations, and the ‘pristine’ West as rational and individualistic.

The historical-dialogical prism fits coherently, I would argue, in analysing the genealogy of the Western identity. And precisely, is this Bakhtinian notion of dialogism the one that appears encapsulated in the term ‘Oriental West’ (Hobson 2004).

In fact, the ‘Other’ had constituted the ‘Self’ long before the Renaissance and the development of the modern Western identity. Thus, the presence of the Muslim Arabs in Andalusia or Sicily became the catalyser for the Christian prelates to frame Islam as the negation of Christianity (Kabbani 1986, p.5), and also to unite a hitherto fractious ‘Europe’ around the idea of Christendom. The myth of ‘Europe-as-Christendom’ (Hobson 2004, p.112), thus, was the first stage of the European identity formation.

Nonetheless, the modern Western identity has in the European Renaissance and subsequent Enlightenment its most important historical underpinning. According to Amin (1989, p.71), the Renaissance gave birth to the two-fold transformation that would shape the modern world: the consolidation of the capitalist society in Europe and its conquest of the world. Key to this modern identity formation is the crystallisation of positivism in the European scientific philosophy during the late Renaissance.

Western powers, thus, began to develop an imperial mind-set (Adib-Moghaddam 2011, p. 117) by affirming their absolute capacity in knowing and possessing the world. The specific historical advantage in terms of science, knowledge and power that the Europeans experienced throughout the Renaissance and the Enlightenment was framed, hence, as historically permanent and almost biologically determined (Goody 1996, p.2).

As Balibar (1991, Ch.3) has pointed out in her analysis of Racism and Nationalism in contemporary history, with the development of an ‘Imperialist superiority complex’, the expansionist project turned into an ‘enterprise of universal domination, the founding of a civilisation’.

However, the final stage was much more pervasive. The ‘Other’, which developed institutions, knowledge and wealth that were incorporated into the ‘Self’, became historically removed. Arguably, the West engaged in a paradoxical negation of the ‘Self’. The positivist, racist stance that the West began to embrace was finally wrapped up in the early 19th century through the construction of the ‘Ancient Greece myth’.

This is precisely what Goody (2006) puts forward with his term ‘theft of history’: Western Europe constructed a false idea of the Ancient Greece, which was seen as the birthplace of Western rationality, as the first step of a teleological line of progress that drove the West towards the Renaissance, capitalism and later world dominance. Hellenism is constructed as the antecedent of the European Enlightenment and, thus, segregated from its Eastern Egyptian and Phoenician legacy. The racist, imperialist European identity was, therefore, fully developed throughout the 17th and 18th centuries through the creation of a mythical discontinuity between Europe and the southern and eastern shores of the Mediterranean (Amin 1989, p.10). As Delanty (1995, p.84) suggests, the construction of the Western European identity found its later stage in the age of Imperialism. Thus, in the encounter with other civilisations, the identity of Europe was shaped through the deliberate dichotomisation of the ‘Self’ and the ‘Other’ as two opposed poles.

But interestingly, civilisations also engaged in dialogical relations under the dialectics of imperialism and resistance. In fact, imperial dominance is constantly co-constituted and re-negotiated through resistance. As Nederveen Pieterse (1990, Ch.15) points out, the civilizational ‘edges’ have to be seen as permeable frontiers within which both civilisations continuously constitute and reshape each other, hence becoming crucial to their own historical trajectories. For instance, it is essential to acknowledge the role and agency of Eastern nationalist movements in securing the decolonisation process in many parts of the world, what subsequently allowed the global expansion of economic relations that were hitherto confined to the limits of the formal empire.

Thus, the Western Eurocentric discourse – underpinned by its teleological, exclusivist and mythical interpretation of European history – keeps on denying the inter- civilisational relations that have been present throughout the last millennium (Hobson 2007b, p.111).

The biggest of all ironies is that, by putting the imperialist mentality forward and denying its eastern legacy, the West has undermined its own ‘Self’.

– Extract from ‘Beyond Eurocentrism: A Historical-Dialogical Approach of the Western Civilisation’. Submitted to the School of Oriental and African Studies (SOAS) of London on the 2nd of April 2014 –